Kathmandu-Tej Bahadur B K, a resident of Sanni Triveni Rural Municipality, Kalikot, accidentally burned himself while playing. He was only three years old – not an age where one would remember the incident.

He also does not remember the pain he experienced then, or how he managed to burn himself. With time, the physical wound slowly healed – however, the trauma from the incident remained.

Although Tej does not remember the accident, his parents who were eyewitnesses to the horrifying incident are not able to shed the memory:

“There used to be a jar of kerosene inside our home. We used to rely on kerosene lamps for light during nighttime. While playing, Tej accidentally spilled the kerosene on his body, and his body instantly caught fire”, the parents recall the horrifying night.

Kalikot, a rural district, did not have a facility for emergency health service. On top of that, the family, already struggling to make ends meet, could not afford to provide extra health care. His life however was spared.

Owing to lack of timely health care, Tej’s body, as he grew started becoming disfigured. His chin was stuck to his chest, both his hands were paralysed. His mouth was closing, and would constantly spill saliva (drool). He was unable to eat, and furthermore, he was also unable to swallow his food.

“I had difficulty walking, could not eat. I would spill half my food”, he remembers. Noticing others distancing themselves from him, he used to ask himself, “How did I become like this? Is this what my destiny holds?”

He would watch his neighbourhood children run and play without any difficulty. He too would long to join them, but was physically unable to. He spent his entire childhood in pain and anguish – he too wanted to have fun like the other children. 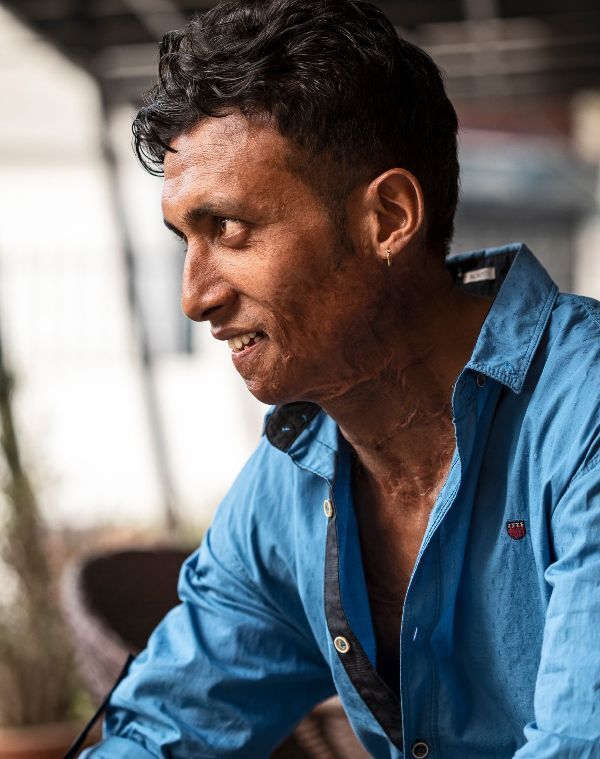 His friends would not come close to him because of the scars he bore on his face, or his disfigurement. Some would even tease him for his physical appearance. He silently tolerated the abuse.

“At the time I had recently started to go to school. Saliva would spill from my mouth”, he says as he recollects his childhood from his foggy memory. “Other children would tease me, they would not come close to me”, he shares further.

After noticing others fear him, he started distancing himself from the outside world. He chose to stay home, and slowly became non-existent within his own community.

The light that stole his childhood was closing in on him rapidly.

His parents would worry about the well-being of their child. They even looked for possible cures for their child – but all roads were blocked owing to lack of financial security. “There wasn’t a day when our hearts wouldn’t cry for our son”, the parents share.

“How will my son eat? How will he survive? Why did this happen to him?” These kind of questions constantly troubled Tej’s parents.

After three long years the day arrived – Tej’s father learnt that Sushma Koirala Memorial Hospital was organizing a free health camp in Jumla. His heart leapt, and his joys knew no bounds. He was ready to do anything to ensure his son was treated at the free health camp.

At the time, roads in Kalikot weren’t as well connected (developed) as they are today. To reach the health camp in Jumla, they had to walk for 2 to 3 days.

Tej remembers his father carrying him on his back and making the arduous walk to the health camp. “My father would only listen to the radio. After learning about the health camp in Jumla, he carried me there all the way for my treatment”, Tej shares.

At the camp, the doctors of Sushma Koirala Memorial Hospital told his father that Tej’s ailments could be cured. At first they were in disbelief – slowly, after they were convinced, the duo were overjoyed.

And thus began the reconstruction of a dilapidated life – in other words, reconstructive surgery.

Tej’s first surgery began at the age of six. At the time, the hospital’s Emergency Medical Director was Dr. Andreas Settje. After that surgeries became a routine in Tej’s life. To arrive at the position he is today, he had to undergo multiple surgeries. He gained a new life after undergoing eight reconstructive surgeries. 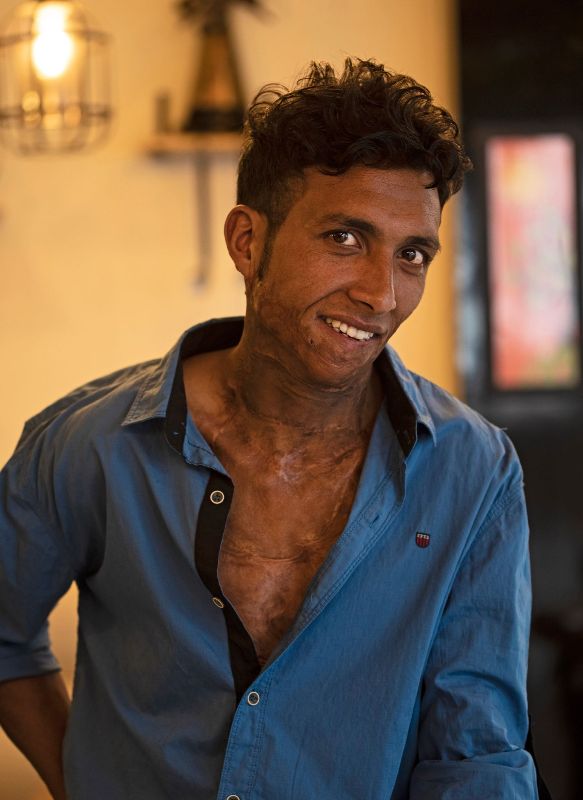 When Tej reached home after his reconstructive surgeries, his parents could not believe the transformation within their son. Only after his joint body parts were separated, was he able to perform his other functions with ease. He slowly gained the confidence to go back to school, and the same friends that would run away from him, slowly became good friends with him.
“I was finally able to go to school, make friends, and live a normal life”, Tej shares.

Today, he is of 25 years of age. He has started his own family now – he has a wife, a daughter and a son. The joy, which was almost extinguished from his life, has returned. It is almost as if he has regained a new life.

“Remembering my old days, I feel I have been reborn. In those dark days, I had never imagined such happy, and such comfortable days would be within my reach”, he shares.
Currently, Tej has completed his twelfth grade. He dreams of securing employment and making his family’s life secure.Tej’s entire reconstructive surgery, which took a painstaking amount of two years of time, was done by Dr. Jaswan Shakya.

“Tej was unable to avail timely health services. The wounds began to heal themselves, and in the process, his skin contracted”, Dr. Shakya explains. “Had Tej been able to get medical intervention on time, he would not have had to face such disfigurement and the associated trauma”, Dr. Shakya adds.

In medical terms, Tej’s condition is called ‘post-burn contractures’. According to Dr. Jaswan such conditions were prevalent earlier, however, with increasing medical interventions, such cases numbers have reduced.

“We did a reconstructive surgery on Tej. We had to do eight surgeries to achieve the progress we made on Tej”, Dr.Shakya adds. “His mouth closes perfectly, his contracted neck has been corrected, and his armpits which were stuck together have been released”, he adds. Dr. Shakya also tells us that such kind of complex surgeries are possible to conduct in Nepal.

Tej’s entire treatment was done for free. He remains in touch with Dr. Shakya, and considers Dr. Shakya his guardian angel.

Dr. Shakya requests anyone who has experienced burns and is unable to avail medical treatment to contact him. 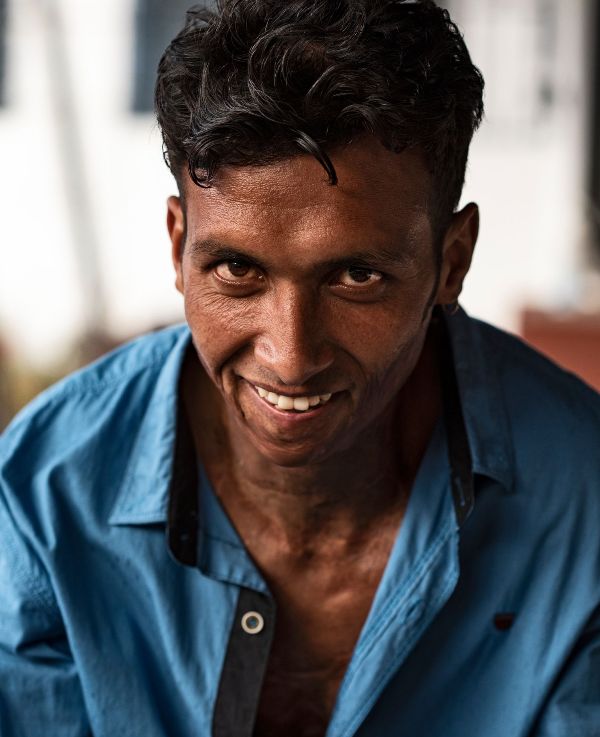 “If there is anyone, please contact me. I will try my best to help”, he tells us.
Today Tej advises anyone who experiences a burn to immediately reach out to a hospital.